2014 was especially good for the roller population in the Bükk region, and 2015 brought success again – with regard to nest box occupation and breeding success.

Within the operational area of the Bükk Working Group, cca. 250-260 nest boxes were checked this year. Between the 10th of June and the 30th of July, 2 bird ringers and 7 assistants worked on the project, mostly in the Borsodi-Mezőség and the South Heves regions, but some birds were also colour ringed in the Kesznyéten Landscape Protection Area, the Bükkalja and in the Mátra Landscape Protection Area, too. The latter site was special as this was the first time a roller received a colour ring here. 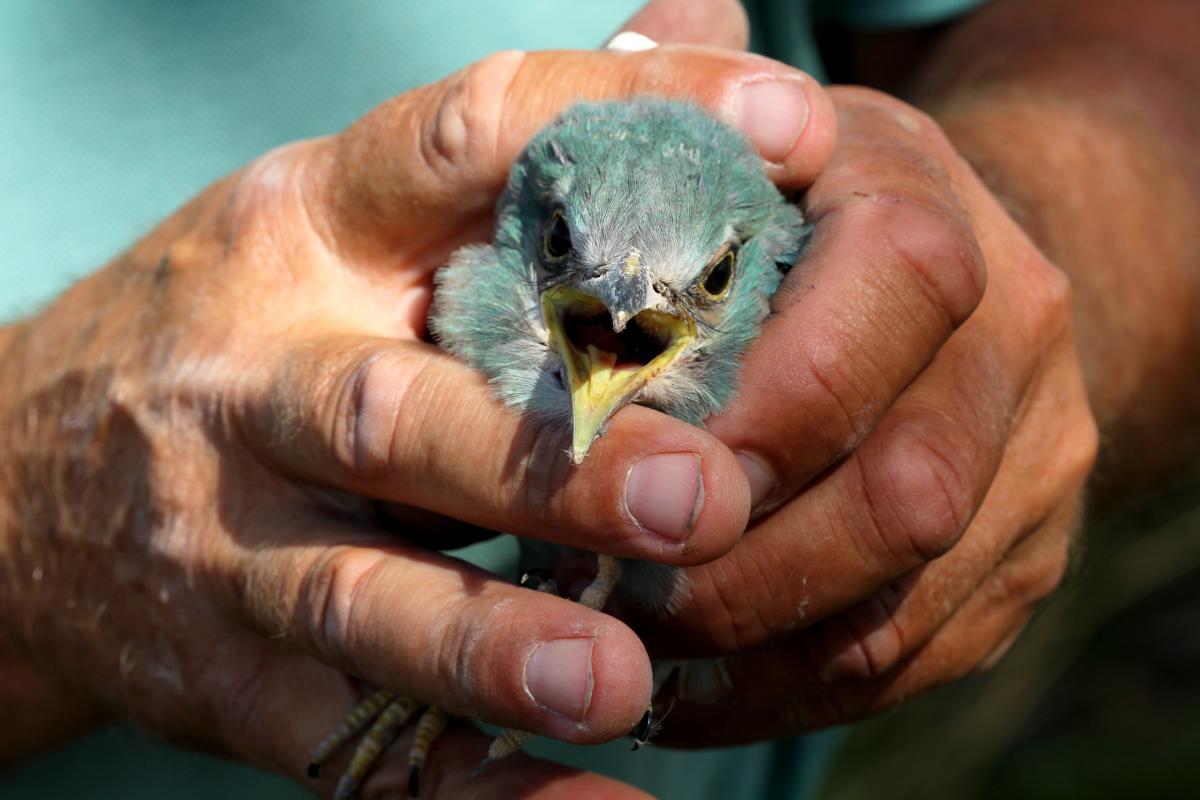 During nest box monitoring, 214 chicks were ringed (199 with a colour ring, too). We have accidentally managed to catch an old bird in Egerlövő, but otherwise we did not make a deliberate effort to trap and tag adults. 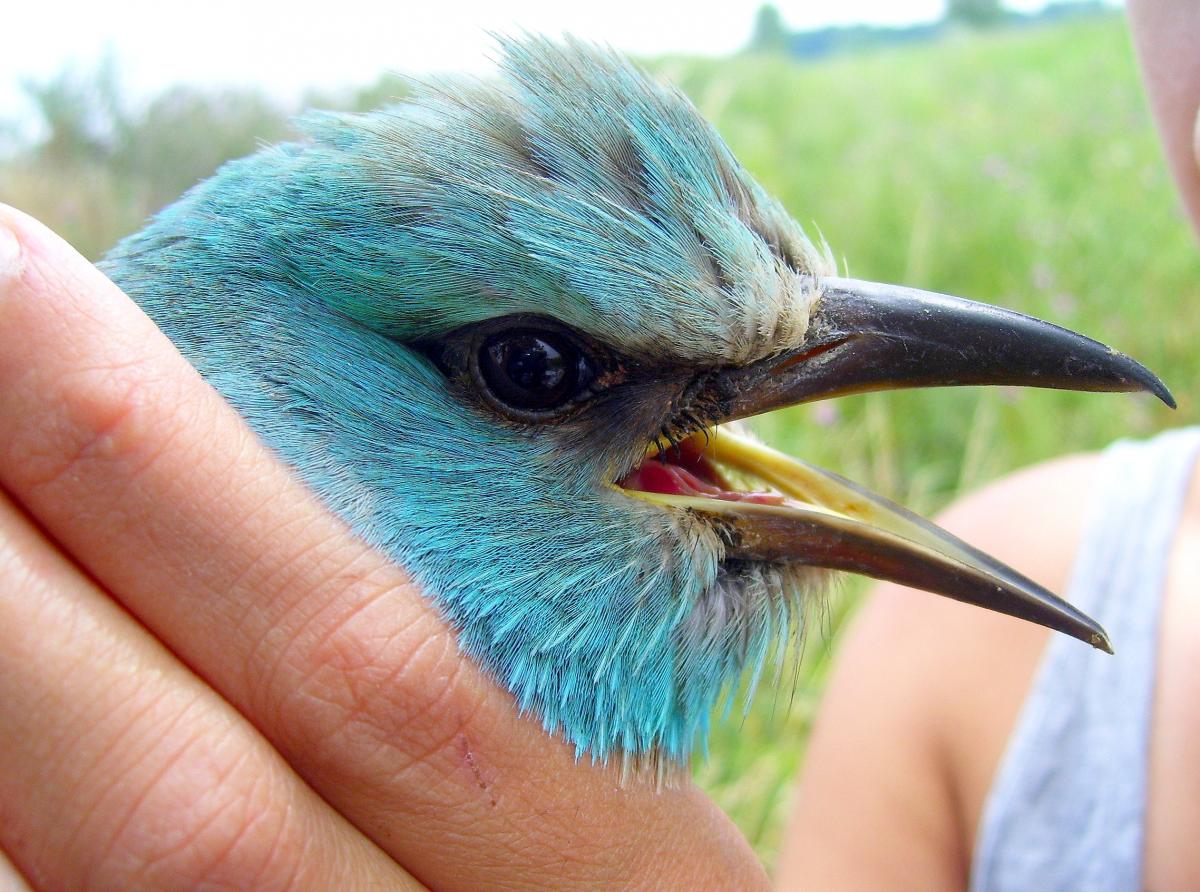 More than half of the nest boxes we checked had rollers breeding in them, most often with 4-5-egg clutches. Unlike in 2014, we have not found any 6-egg clutches this year. The breeding attempts were asynchronous as usual: some clutches had fledglings, others were still incubated. There was no consistent pattern among the different sites. In general, the incubation period was over by the end of June-beginning of July, but there are always exceptions to the ‘rule’.

Other species have also bred in our nest boxes. Rollers never build their own nests, so by looking at the nest material found below the roller clutch, we can figure out what other species have used our boxes before the rollers arrived. The winner in 2015 – again – was the starling (Sturnus vulgaris). Their fledglings were all around throughout the season. The runner-up was the tree sparrow (Passer montanus), but in a few nest boxes we found real ‘treats’: little owls (Athene noctua) and Scops owls (Otus scops). Those nest boxes that did not have lids were preferred by kestrels (Falco tinnunculus). (These boxes will be repaired or replaced by new ones in future.) There were records of boxes occupied by bees or wasps, luckily, not too many. 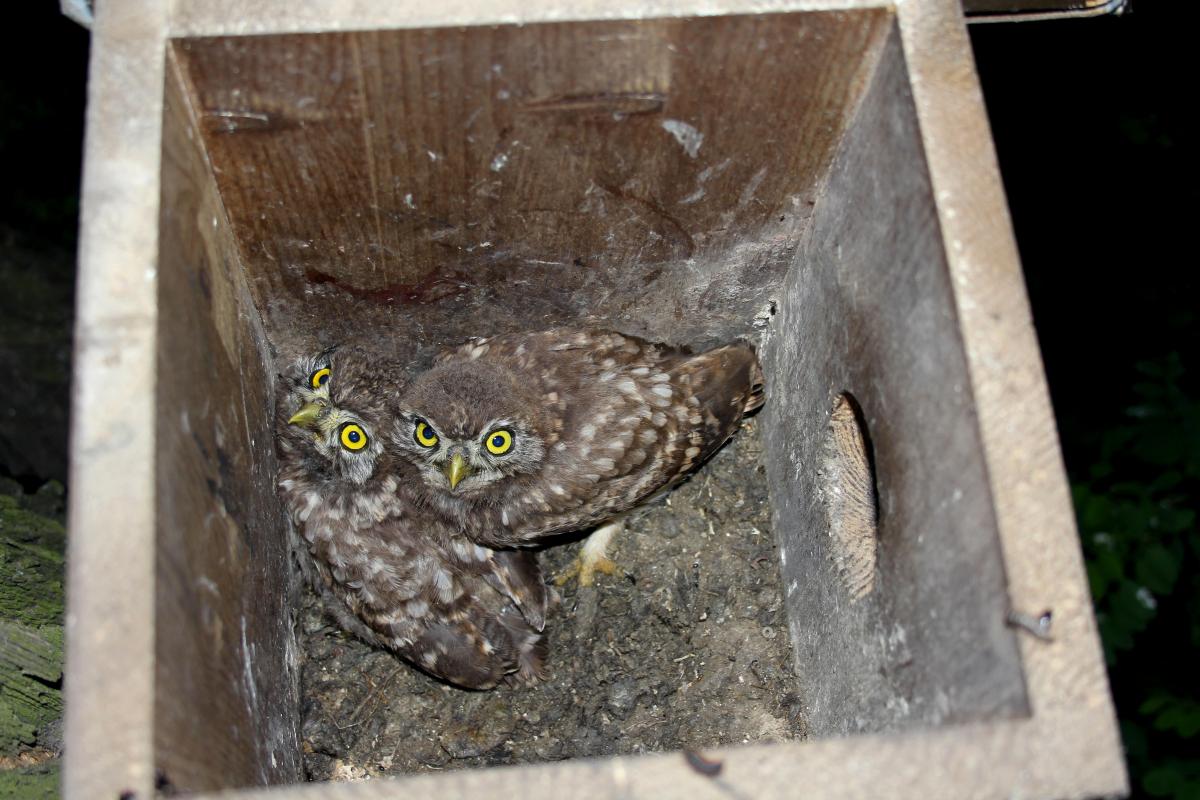 Some nest boxes provided real curiosities on the invertebrate fauna. One pair of rollers fed the chicks on ramshorn snails – there must have been a dried out wetland somewhere nearby – but we also found remains of rhinoceros beetles, and mole crickets too, which was unprecedented so far. Several nest boxes contained remains of stag beetles and thus served as valuable data points for this Natura 2000 species. The beetle species most commonly preyed upon were the rose chafer, but some sites also had remains of the protected flower chafer, too. Several nests contained an ensemble of land snails, longhorn beetles, grasshoppers, clown beetles, carabids and many other beetles. 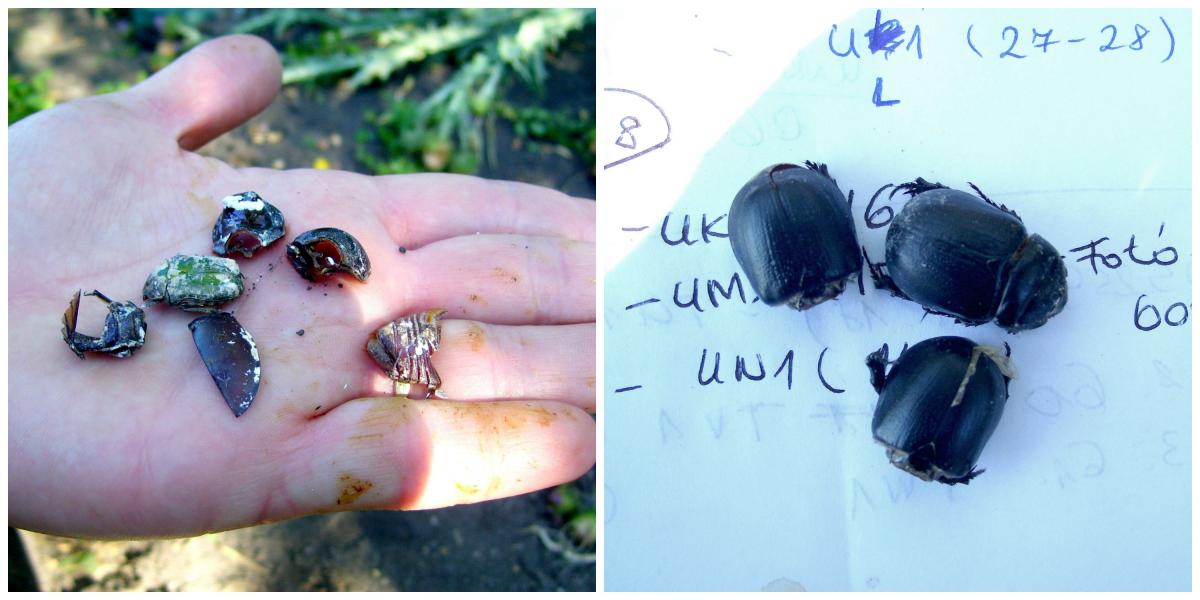 A visit to a nest box in Borsodivánka became a memorable experience. The few-day-old chick was eating a lizard during the time of check-up. The sight of the tiny chick with a long tail protruding from its beak was so bizarre, we first thought it was trying to swallow a dry stick. 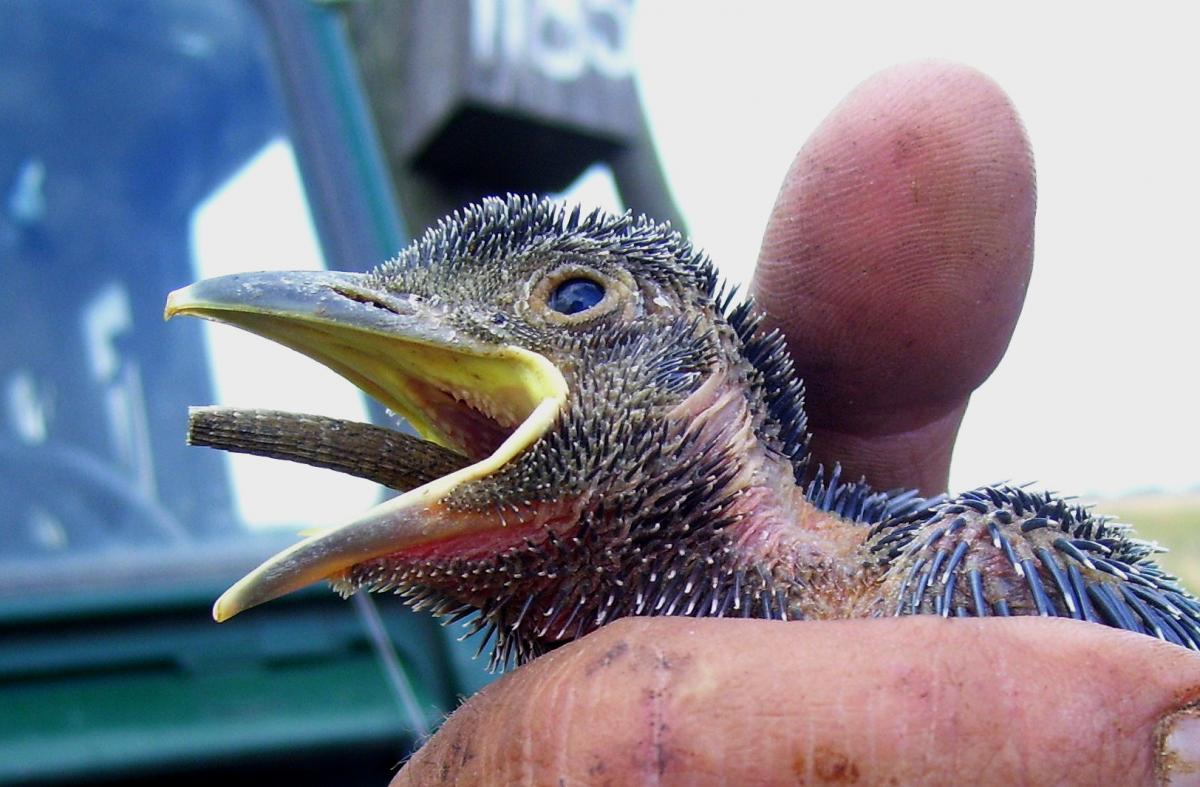 There are other strictly protected bird species breeding more or less at the same time as the roller. The saker season was hardly over in the Bükk National Park when the roller season began. As a consequence, conservation activities limited to the breeding season (such as checking nests and tagging birds) largely overlap on the puszta. Imperial eagle (Aquila heliaca) and red-footed falcon (Falco vespertinus) nestlings were also ringed systematically during the spring and summer. 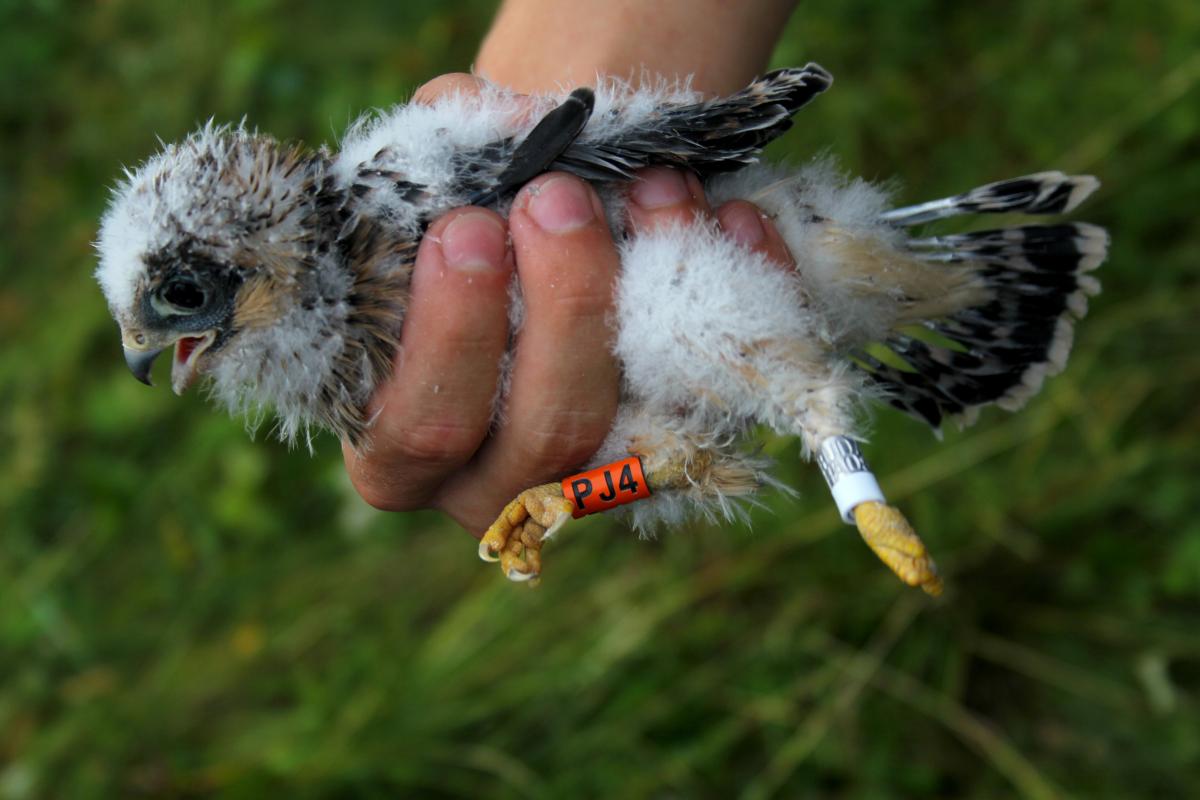 Due to last year’s increase in vole populations, the number of stone martens (Martes foina) also grew. Knowing that these predators would take their toll on the bounty of rollers, somewhat clouded our happiness. Our prediction soon became reality, as in the Szentistván region 3 out of 5 nest boxes chosen for ringing representation were most likely predated by martens. This made us pay closer attention to the signs of marten predation later on in the season (claw marks, bite marks on the nest box). During the summer, several such boxes were found, some with dead chicks inside. When older (already feathered) chicks were found dead probably on account of malnutrition, we assumed that one of the pair was killed by a predator and the single parent was not able to raise a healthy brood alone. 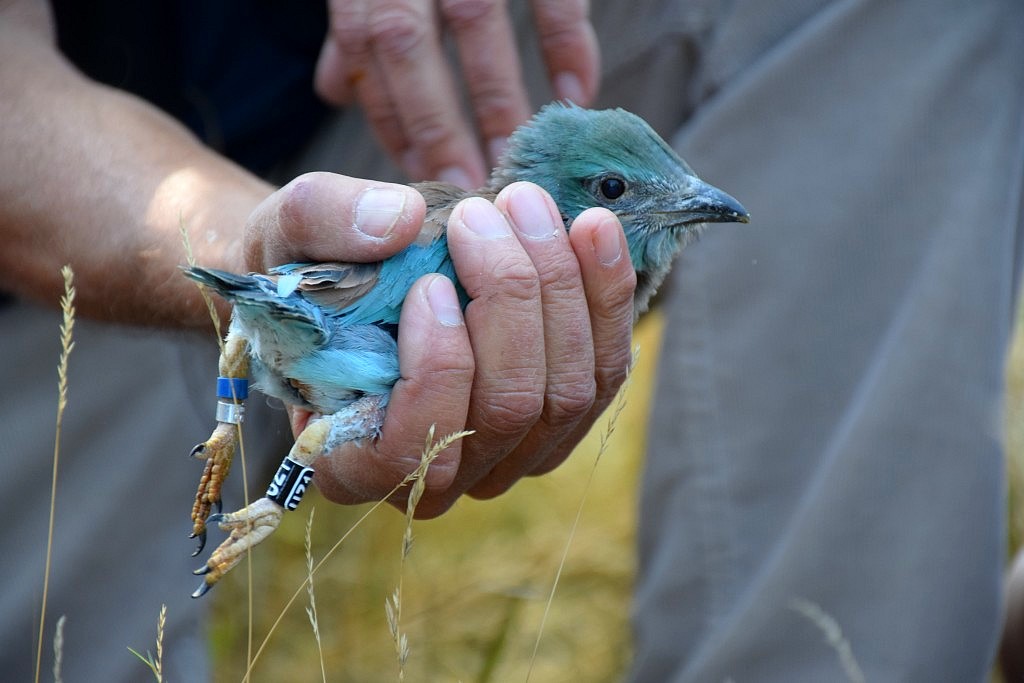 On one occasion, we were able to save one young bird’s life. In the Mátra Landscape Protection Area, one chick stayed behind when its siblings had already fledged. The 28-29-day-old fledgling got tangled in a piece of string and could not leave with its siblings. Luckily, the parents were still feeding it so its overall physical condition was good. After disentangling it, the bird few out of the nest.

In summary, brood sizes remained stable as compared to last year. The number of addled eggs was also very much the same as in 2014. However, stone marten predation became more intensive and we need to act on this in the future. We would be grateful for any kind of information as to the control of this mammalian predator. 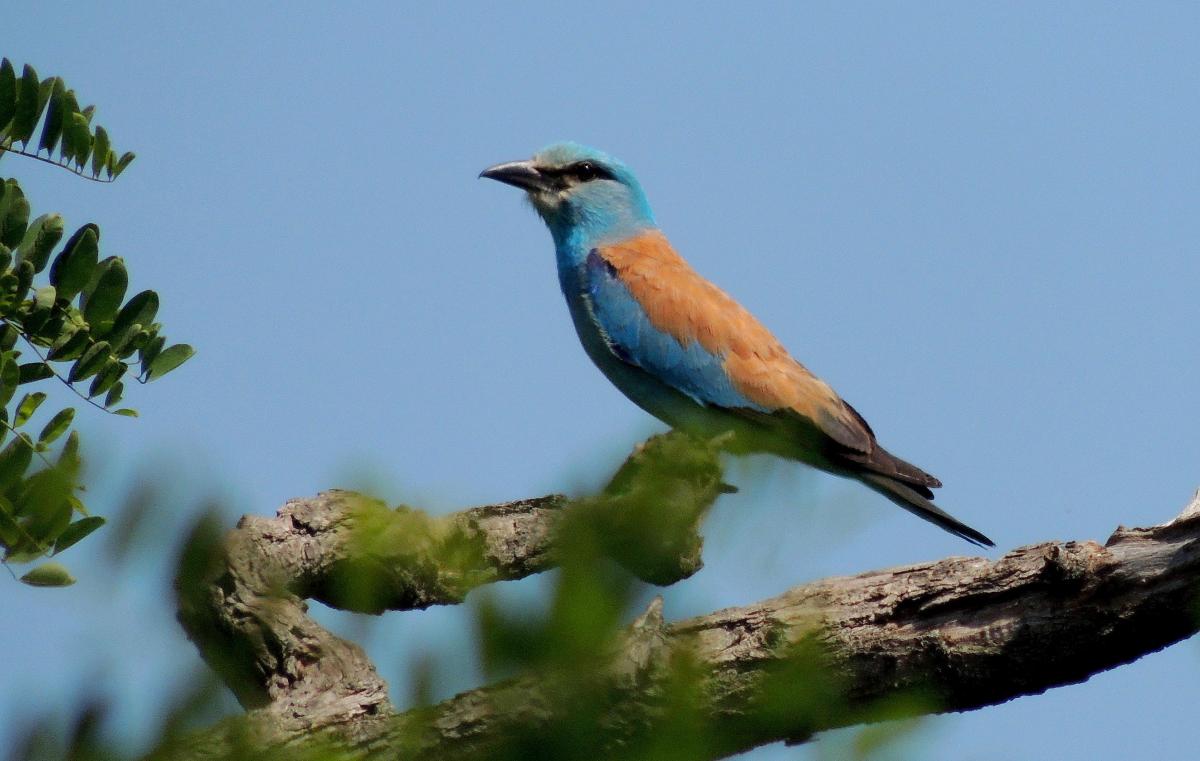 Colour ringing will hopefully yield useful information already during the delivery period of the project, but unfortunately we cannot maintain the same ringing effort from the next year onwards.

Nest control rounds also confirmed that many boxes are in poor shape and thus inappropriate to provide rollers with a nesting site. These will soon be replaced and new ones will be added in habitats that are short of nesting sites, but otherwise ideal for the roller. Fixing the entrances with a metal frame is probably an efficient method to prevent marten predation – we will try this at every nest box we have... so many things to do in the coming year!

Field work was carried out by the following people: