Kesznyéten is one of the project sites of the roller conservation project within the territory of the Bükk National Park Directorate. The Landscape Protection Area became protected in 1990, and during the designation of the Natura 2000 network, it also became a Special Protection Area ( Kesznyéten SPA, code HUBN1005). 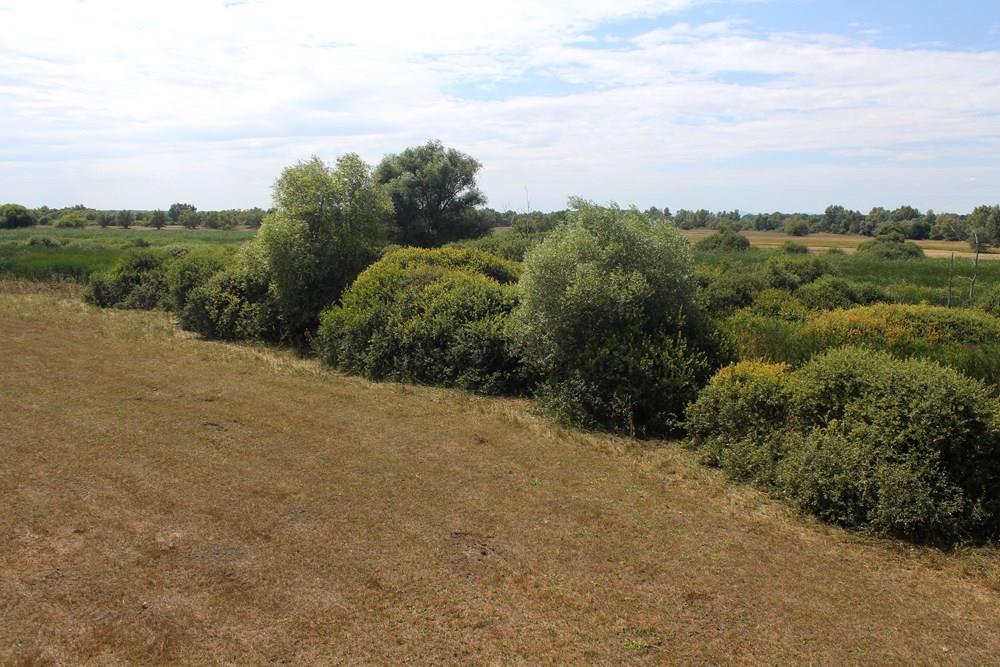 The roller is a relative new-comer in the area compared to other steppe landscapes within the national park (such as the Borsod Plain and the Heves Plain). This makes the occurrence of the species all the more interesting, and a real success story.

The Bükk Local Group of BirdLife Hungary (MME) has initiated roller conservation activities 23 years ago. A huge amount of roller nest boxes were installed in the region, but for a while only common species, such as starling (Sturnus vulgaris), and tree sparrow (Passer montanus) bred in them.

The first breeding attempt by rollers was recorded exactly 10 years ago, in 2005, giving us hope that they will continue and prosper. Unfortunately, the pair disappeared afterwards. However, new pairs took up residence in 2008, and the number of breeding pairs have been on the rise ever since!

The 2015 season started with 48 roller nest boxes, of which we found 5 to be broken in the spring. The remaining nest boxes harboured 32 breeding attempts, 29 of which were successful. The fact that more than half of the boxes were occupied means that installing nest boxes is an effective measure to increase the population size to the carrying capacity of the area.

The first colour-ringed bird in the area was marked by Tamás Szitta on the 31st of July 2015 – the last individual of the season to be ringed by the members of the Bükk Local Group of the MME. 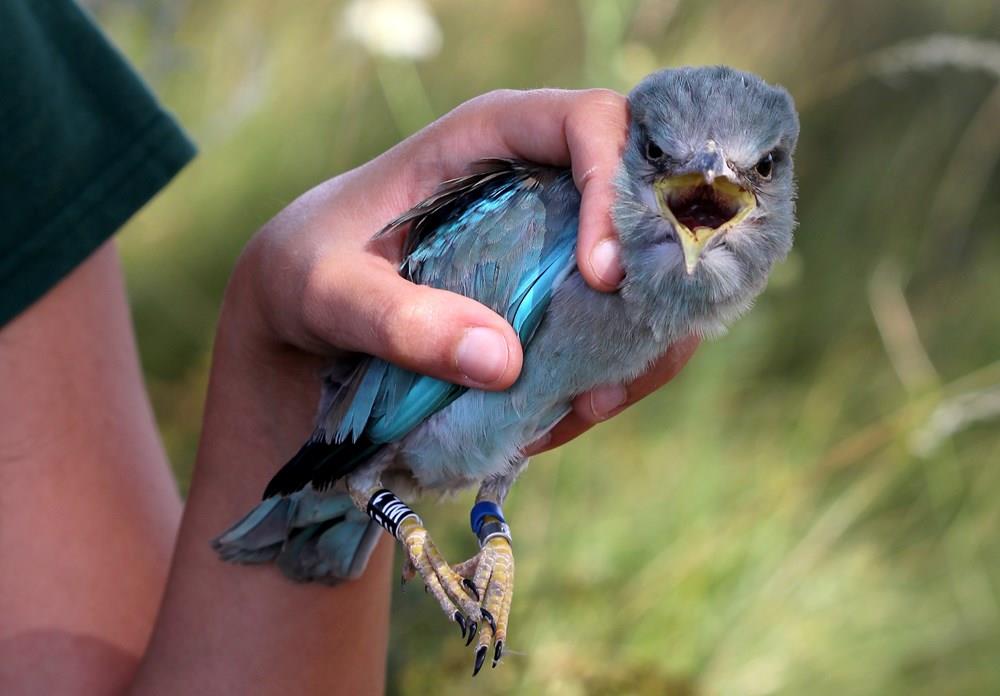 Obviously, the roller is not the only natural asset of the Kesznyéten steppes. This landscape, with its winding rivers, marshes and reedbeds is home to several other protected bird species. 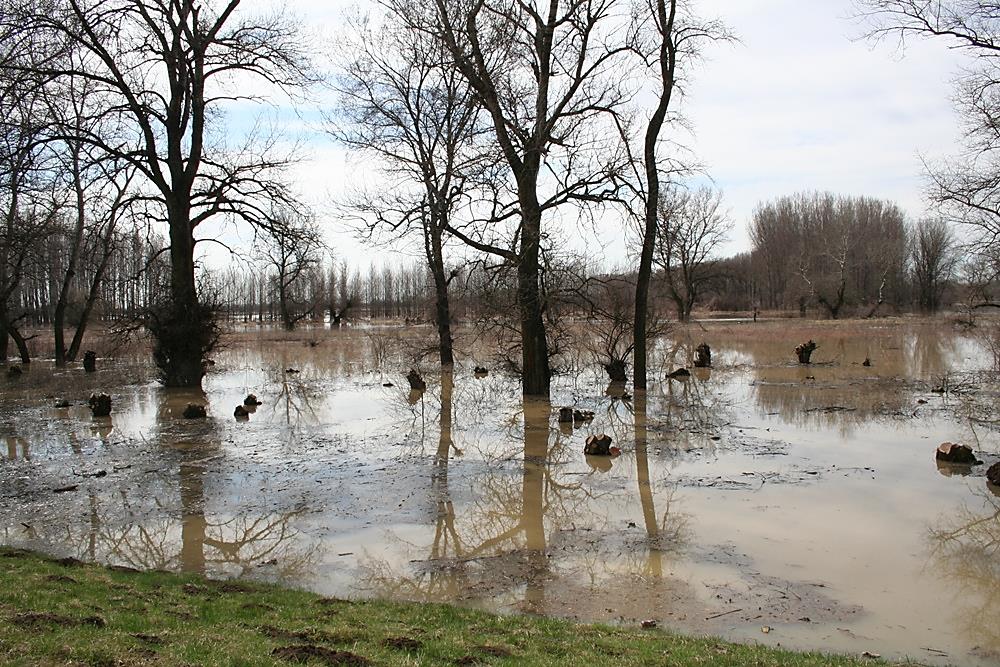 Another warmly welcomed regular breeder in the area is the red-footed falcon (Falco vespertinus), that occasionally bred in the area in the past. There are a number of smallish gathering spots, and a host of nest boxes awaits the birds in some locations which had been considered ideal for the species. The situation of the saker (Falco cherrug) is similar. Thanks to active conservation, the saker bred in the landscape protection area in the 1990s, but is a lot more numerous in the neighbouring Hortobágy National Park. Nonetheless, we can pride ourselves with the addition of the imperial eagle to the list of breeding species.

We had high hopes that the one known pair of Montagu’s harriers (Circus pygargus) will successfully fledge chicks this year, but it is likely that wild boars put an end to the breeding attempt, as they had done last year. According to the information from the Montagu’s Harrier Working Group of the MME, the number of breeding pairs has drastically fallen as well as the breeding success all over the country. 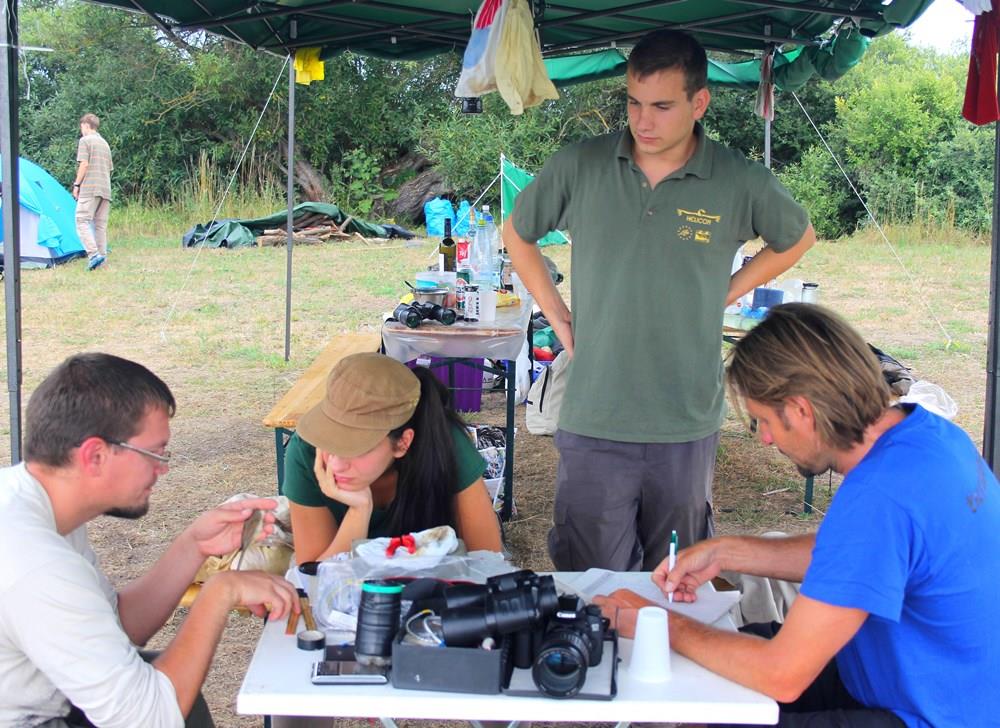 Under the supervision of the local national park ranger Zákány Albert and the vice-chairman of the Bükk Local Group of the MME, the second bird ringing camp was organized in the Bátka-köz, close to Tiszalúc in July. The two-week event yielded a species list typical of the local forests, reedbeds and shrubland. We managed to ring 36 species, of which the most common ones were the reed warbler (Acrocephalus scirpaceus), the tree sparrow (Passer montanus), and the marsh warbler (Acrocephalus palustris). We’ve also found nightingales (Luscinia luscinia), and moustached warblers (Acrocephalus melanopogon) in our mist-nets.

The greatest surprise and rarity was a male common rosefinch (Carpodacus erythrinus) on the evening of the 27th of July. The camp leader was Pál Tóth at the time and, according to the database of the Ringing Centre this was the 15th record for this species being ringed in Hungary. 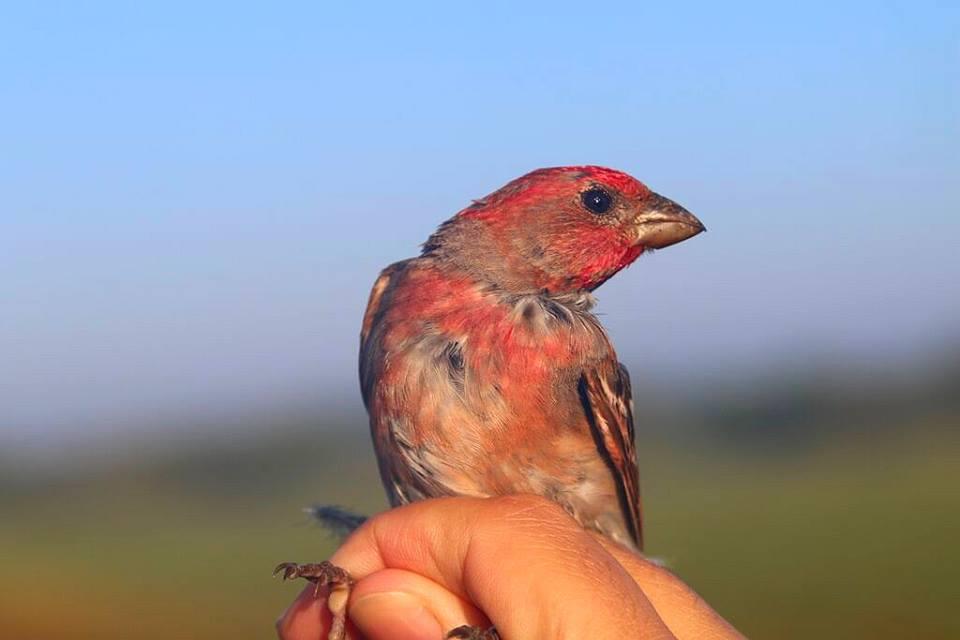 The protected marsh harrier (Circus aeruginosus) was a common sight around the camp site. A second-year male was found injured by a ‘wobbler’, an artificial fishing bait. The fishing line was wrapped around the right wing so tightly that the bird snapped the bone trying to free itself. The tangled individual was freed, and the carefully re-positioned wing fixed for the duration of transport. The bird was taken to the Hortobágy Wild Bird Clinic. The same angling device is a potential threat to other birds, too. A strictly protected white-tailed eagle was found with a wobbler stuck in its beak earlier on. 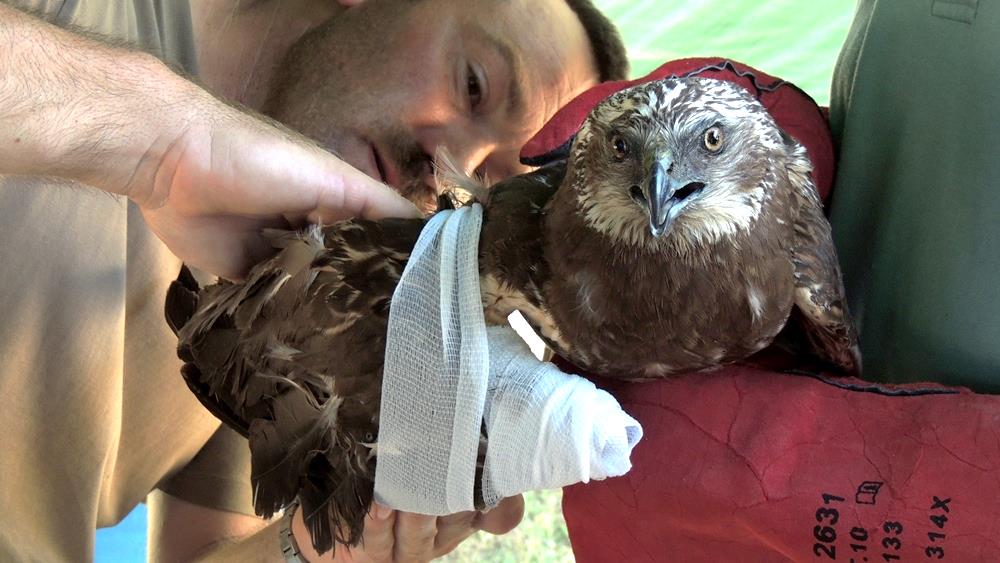 We placed a few live-traps for small mammal species around the camp for one night. Based on trapping results, the most common rodent in the area is the striped field mouse (Apodemus agrarius). We’ve also caught one pygmy shrew (Sorex minutus). Apart from the most common mice, voles and insectivores, another prey species of outstanding importance is the souslik (Spermophilus citellus) which is, however, rather scarce in the area. In the vicinity of rivers, the life signs of the reintroduced beaver (Castor fiber) can be seen, and occasionally the prey remains of the otter (Lutra lutra) are also found. 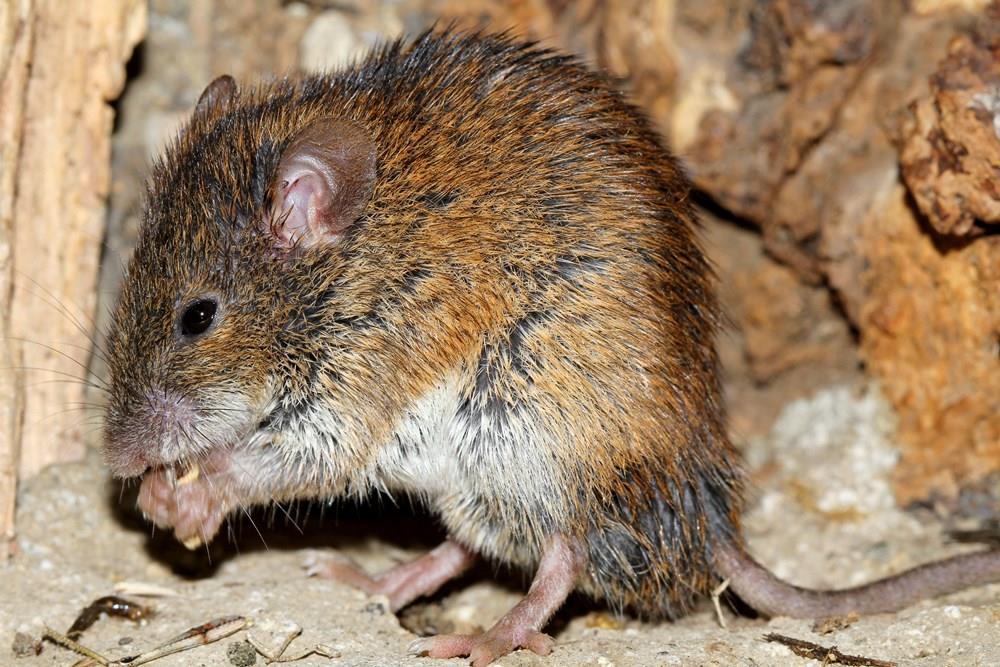 Besides those listed above, other rare animal species find shelter in the area such as the mudminnow (Umbra krameri), the weather loach (Misgurnus fossilis), the scarce fritillary (Euphydryas maturna), the pond turtle (Emys orbicularis), and the Danube crested newt (Triturus dobrogicus) that was the Amphibian of the Year 2015. 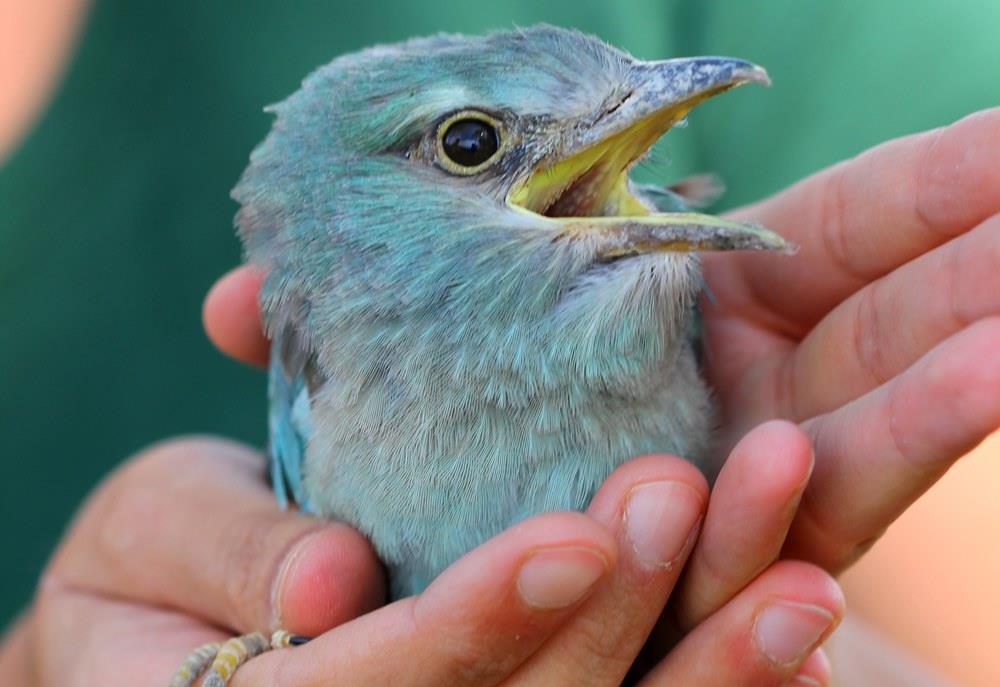 A roller chick about to fledge  (Photo: Szitta Tamás).

The steppe habitats of Kesznyéten are appropriate for the roller, as there are both grazed grasslands and alluvial forests. Our long-term goal is to connect the roller populations along the River Tisza in order to create a stable population within the Bükk National Park.

In the next year, we plan to ring more chicks with colour rings in Kesznyéten, as it could be very important to see the movements of the recruits to this relatively new subpopulation.

Nike Benassi "Just Do It." White/Silver