In the end of April we have received a video message on Facebook of someone unpacking shot European Rollers from a box - including the body of an individual ringed in Hungary and tagged with a logger.

Native Arabic volunteer of MME BirdLife Hungary translated the video and ascertained that the hunter confused the Roller with a White-spectacled Bulbul which is a common species in the Middle East (however the two species are practically unmistakeable) and shot it by mistake.

For the record: a White-spectacled Bulbul (on the left) and a European Roller (on the right).. not much alike, are they? (Photos: Béla Tokody)

European Rollers are loop migrants, they spend the winter in the South-Southwestern part of the African continent, however in March and April they use the East African path on the way back to the breeding sites. On the road to the European breeding grounds they cross the Arabian Peninsula, touching Saudi Arabia, Iraq, Syria and Lebanon. 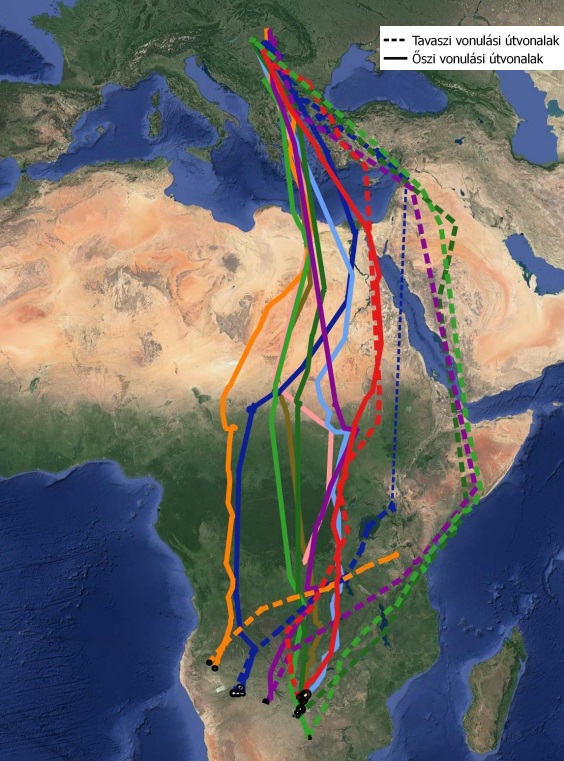 Migration routes of our satellite-tagged individuals. Dashed lines mark the birds’ path
from the wintering sites to the breeding grounds. (Source: satellitetracking.eu).

Despite the fact that we barely get information about illegally hunted individuals, a couple of recovery data can be found in the database of the Hungarian Bird Ringing Centre about dead (presumably shot or captured) Rollers from the area. Although Egypt, Saudi Arabia and Libya are the most affected with the problem, the Roller population breeding in Hungary is significantly threatened by illegal hunting activities on the migratory paths. The Mediterranean Basin is experiencing the loss of an estimated 13-37 million (potentially 25 million) birds every year by hunting activities in South Europe, North Africa and the Middle East. Obviously most cases remain hidden, similar to the currently received feedback happens in very few cases. BirdLife International has been running an international campaign for two years now to raise awareness to illegal bird killing in the Mediterranean region, please check out the campaign Flight For Survial.

The following video has been received on Facebook by the European Roller conservation project: 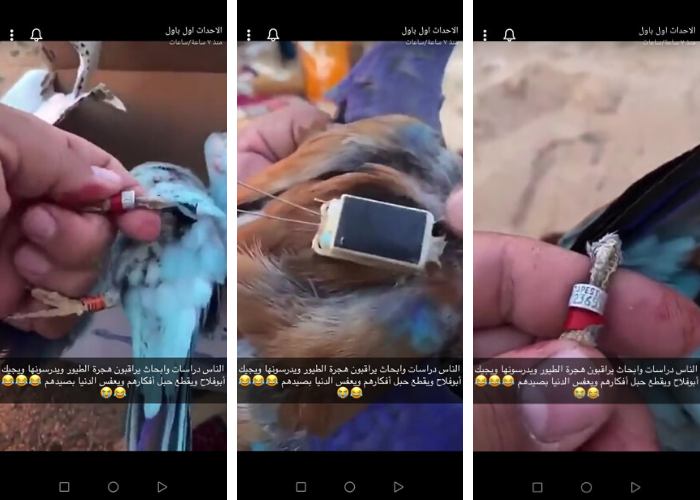 The logger and the rings are clearly recognizable in the pictures. (Source: internet)

The tag on the dead Roller is a special UHF logger with short detection distance which is not designed for long-distance data communication. This type of device sends radio signals to the base station in a range of 200 metres, which makes them suitable for studying individual movements within the birds’ home range. The returning tagged birds in the spring are “woken up” by the researchers with the help of the base station while they are approaching the bird by car. The video went viral on the internet and reached Saudi Arabian authorities as well. They help returning the tag to BirdLife Hungary by post which can continue to serve the species conservation on another bird.

However more and more people learn about the harmful effects of illegal hunting thanks to international campaigns and the work of NGOs, besides the extensive communication tightening local authorities’ enforcement of rights would be essential, too. Unfortunately it has little significance compared to the social problems these countries face, therefore the implementation of nature conservation measures is particularly difficult.