The first two satellite tagged Hungarian rollers had set off on the 7th September 2015. towards their yet unknown African wintering grounds. They flew over 4000 kilometres within a week, and their incredible journey can be followed on the internet. 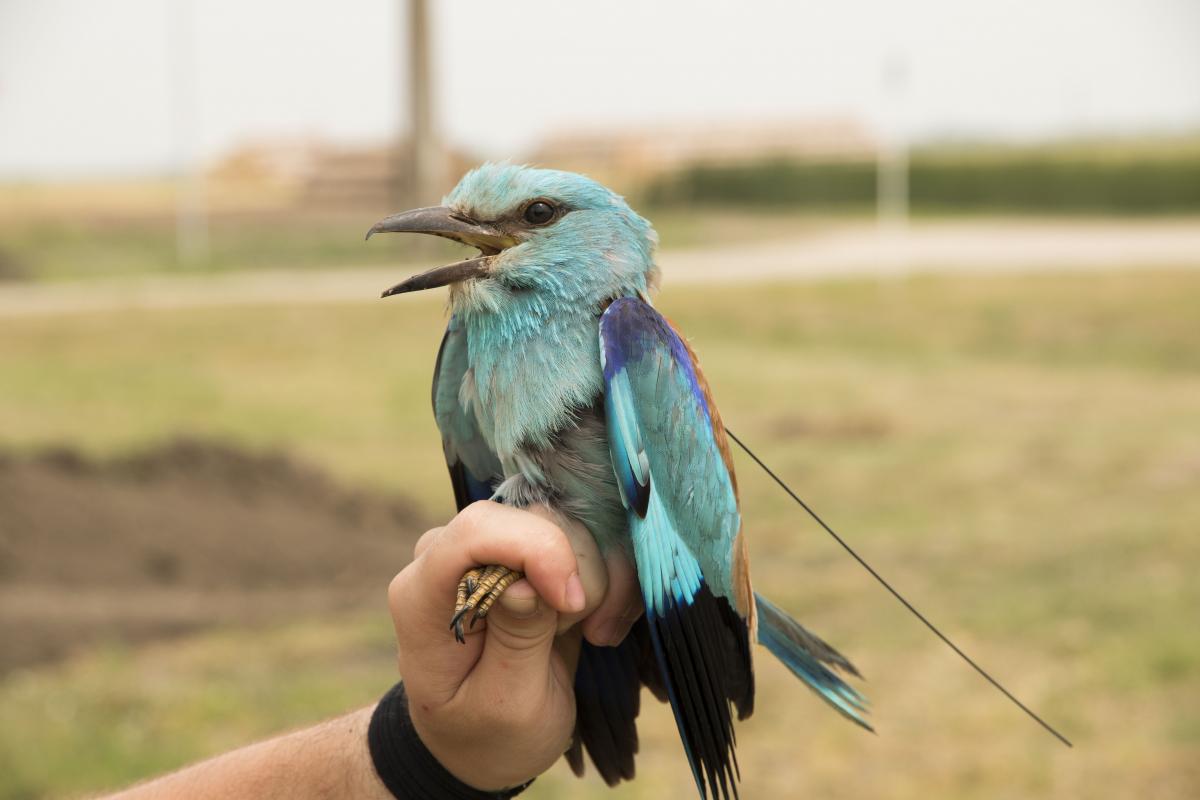 One of the satellite-tagged Rollers, named “Pétör” (Photo: Béla Tokody).

Approximately 100 rollers will be tagged within the framework of the “Conservation of the European Roller within the Carpathian Basin” LIFE+ project by experts from BirdLife Hungary (MME).

Since the year 2008, 212 individuals of 17 bird species were tagged with various satellite transmitters across Hungary. From this summer onwards rollers have been added to this already impressive list. Roller populations have been significantly decreasing in all parts of Europe, with the species becoming extinct in several Western European countries. The Carpathian Basin’s population is yet stable, hence it’s protection is pronouncedly important for the future of this species within the EU.

The migration routes and wintering grounds of our rollers are almost completely unknown. The traditional method of ringing and recapture only provided a small amount of data over the last 100 years, which is clearly not enough if we want to understand the threats rollers face during migration and wintering. Rollers only spend about four months in Europe each year, the majority of their time is spent on spring- and autumn migration, and wintering in Africa. During the almost 10.000 km long journey they face many challenges and a large number of birds perish due to illegal hunting, degradation of stopover and wintering sites, food shortage and global climate change. Better understanding the exact location of the migration routes could help us reduce these threat factors and could potentially lead to attaining legal protection to the most important wintering sites.

The adult female roller, named „Csele”, and second year male, named „Pétör” were equipped with satellite transmitters on the 9th and 10th of June around Kiskunhalas and Kardoskút, Hungary. The transmitters weigh less than 4.5 g, less than 5 % of the roller’s body weight. The birds only had about a month to prepare for their long journey after successfully fledging their brood.

The two satellite-tagged Rollers started their journey on the 7th September 2015. Two days later they were located some 1200 km south, respectively in Greece and Turkey, heading straight towards crossing the Mediterranean Sea. 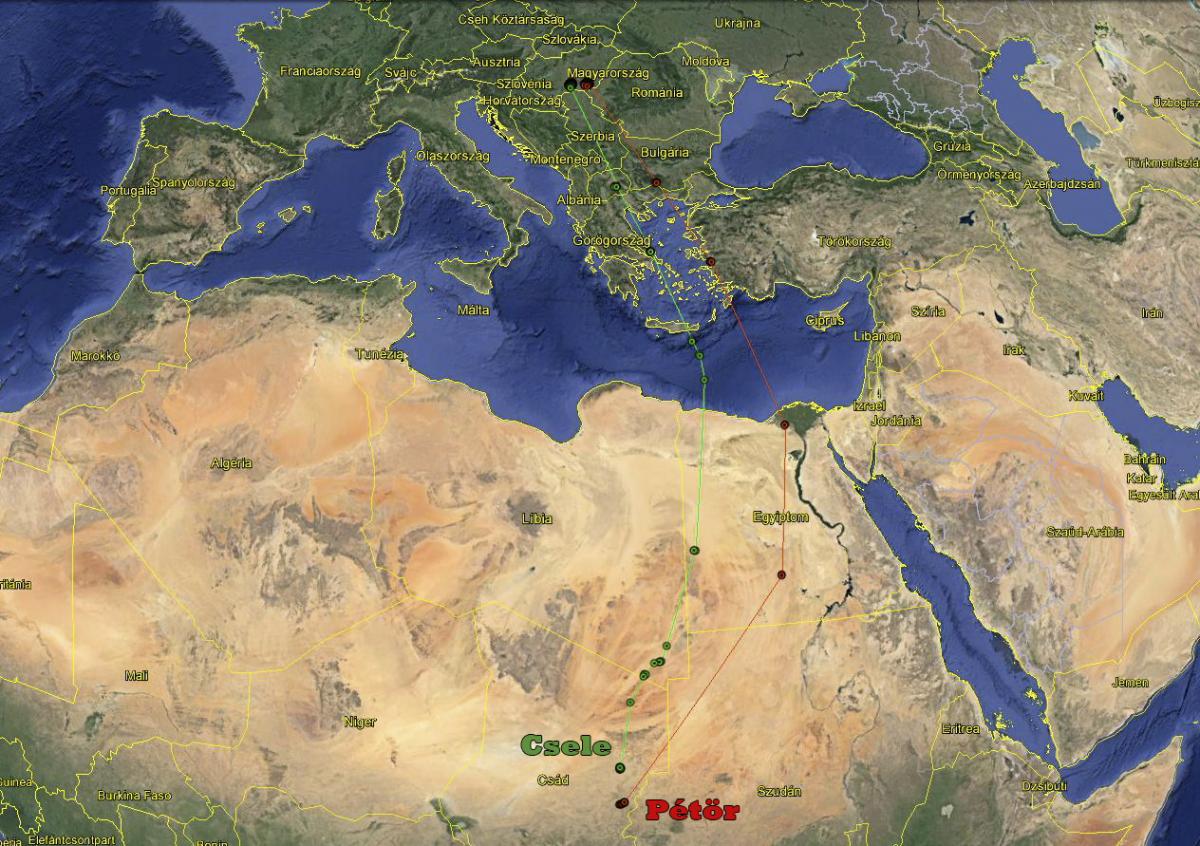 The position of "Csele" and "Pétör" on the 14th September 2015. Click on the map for the latest information (Source: jeladosmadarak.mme.hu).

The wind conditions of the area have most likely affected the timing, and route preferences of the birds. According to the global wind map, the flight of the birds was supported by a northerly wind whilst crossing the Mediterranean Sea and the Sahara. 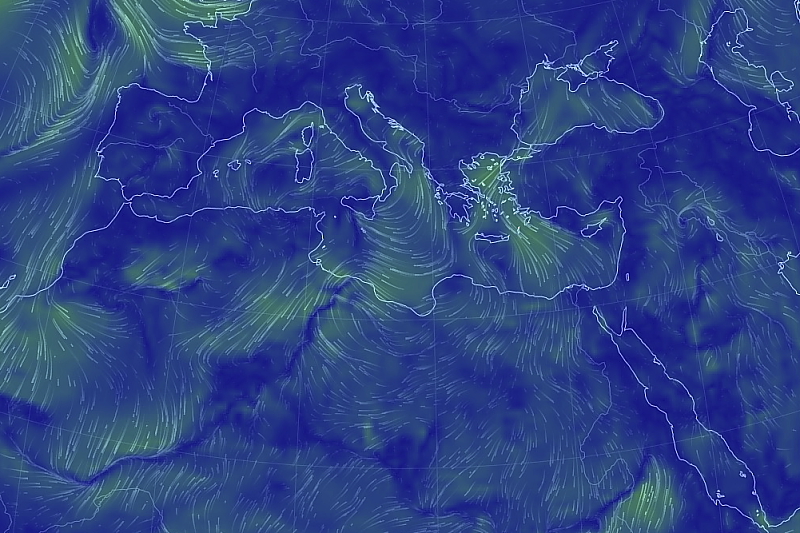 Wind conditions across the Mediterranean on the 9th September 2015. Click on the map to animate the image. (Source: earth.nullschool.net).

It is interesting that while white storks avoid crossing the Mediterranean Sea despite their large wingspan,  rollers - however smaller in size- do not mind crossing the open water. Our birds have reached the northern shores of the African continent on the 10th September 2015, and it only took them a day to get as far as Southern Egypt, and the border of Libya and Chad. By the 13th September they have already completed almost 4000 kilometres, and got to Eastern Chad and there is a high chance that they will continue their journey further south. Hopefully they will be lucky enough to complete their migration, allowing us to locate the exact wintering grounds of the Hungarian breeding population.

If it will be so, the story will continue...