This year Eleven started his fourth journey towards Africa. The fact itself would not set a record of course since thousands of Rollers fly this long distance year by year, he is the only individual however to be tracked for such a long time. Eleven has been equipped with a small satellite tag that regularly sends location points since June, 2016.

Since the beginning of the project more individuals have been equipped with the same type of tracking devices, unfortunately most of them fell victim on the journey, many of them leaving data of only 1 or 2 migration routes. We have gathered a significant amount of useful information with the help of these tagged birds through the years, though.

We identified the main migratory routes and the most important stopover sites of the Rollers from the Carpathian Basin. We observed them spending weeks or even months on proper feeding habitats but crossing over sites with unfavourable conditions – like rainforests – in a few days in one session. 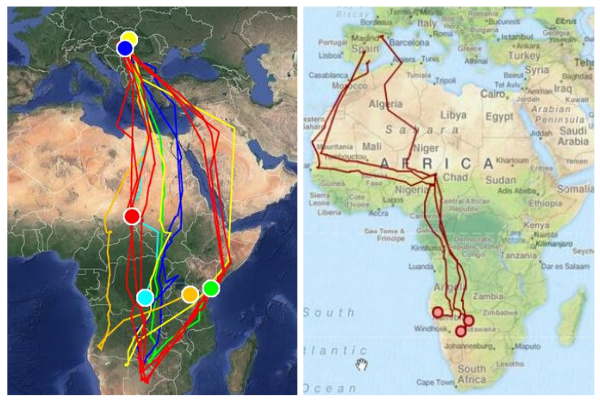 The map presents the migration routes of Eleven (marked with red) and another Rollers breeding in the Carpathian Basin. It is distinct that the population migrates along East Africa, however the different individuals choose rather diverse paths. In contrary, the map on the right demonstrates the typical West African migration path of the European Rollers from Spain.  (https://rollerproject.eu/en/content/journey-our-satellite-tagged-rollers). 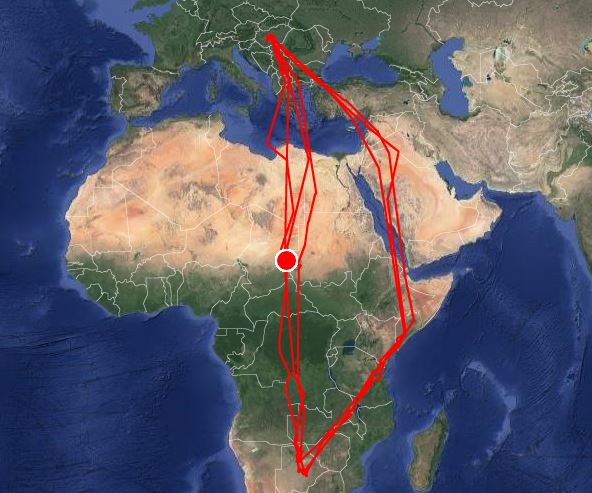 This map demonstrates three whole migration loop of Eleven and the route he begun this year. Currently he is awaiting the dry season at the Sahel region.

Eleven is in the Sahel region from mid-September. He is expected to leave in the beginning of November to spend winter months on the savannah south of the Equator which is becoming grassy, rich feeding habitat as a result of the rainy season. Practically Rollers follow the suitable feeding habitats with their migration throughout the year avoiding the cold season in Europe and the dry season in the savannah region.

The bird clearly returns to this area year by year, the three lines represent the routes of previous years at the boarder of Chad and Sudan, and the red dot shows his current location. The nodes on the straight lines indicate hunting tours of several days.

Hopefully Eleven arrives to the wintering sites with success again and we can continue to follow his route for a long time.