Many bird species pick up loose bits of the polypropylene baling twine to use as nest material. The problem occurs when their feet get tangled up in the knots and loops of the strong twine whilst in the nest. ​

The hazard is even more severe if the nest is used over several years by more than one species. Polypropylene takes years to degrade, so a piece of twine can jeopardize many breeding attempts.

Deaths caused by baling twine have been observed in amongst many bird species, but is an especially common problem with white storks. Blood circulation may stop in the entangled leg, leading to necrosis and the loss of the limb, sometimes even to the death of the individual.

Unfortunately rollers are also affected by baling twine accidents. Since rollers are secondary cavity nesters, their nests are often used by starlings earlier in the spring. Starlings frequently pick up loose bits of baling twine to build into their nests, causing potential danger to the rollers. 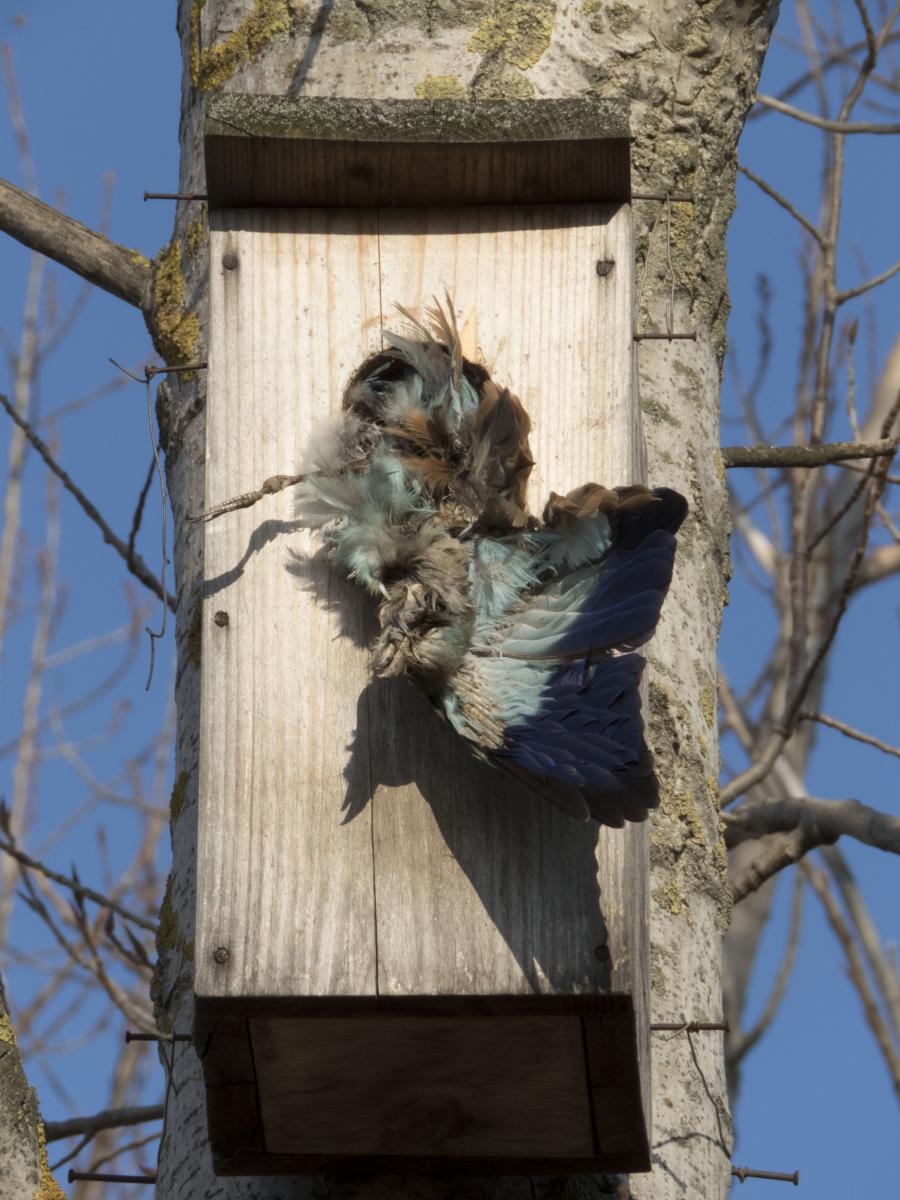 It’s down to pure luck that Rollerproject staff could save an entangled roller from the certain death near Mórahalom, Hungary. A routine nestbox check revealed an incubating male tightly held by a piece of polypropylene string on its left leg. One of the eggs in the nest were broken suggesting that the bird was trying to free itself. 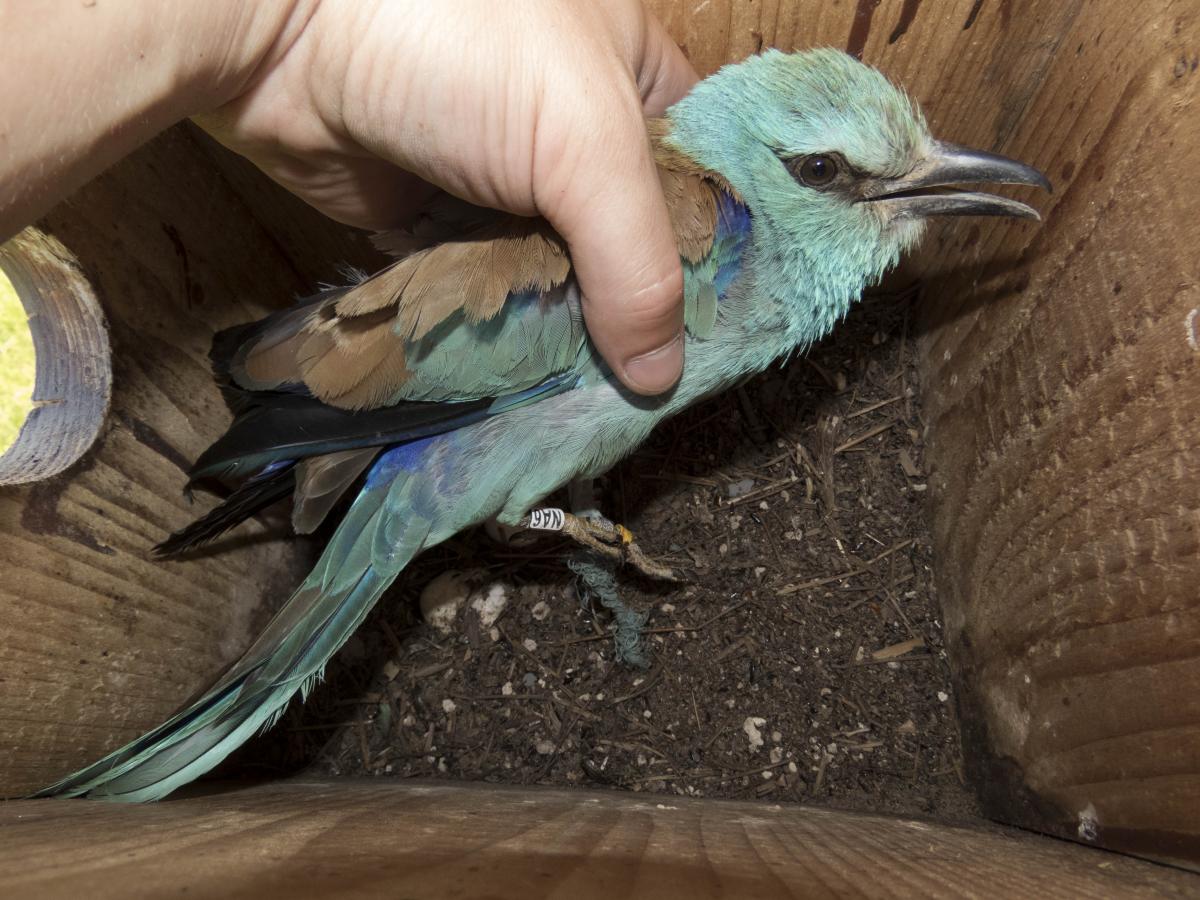 The twine was strongly held by the other nest material, so the roller had no chance of setting free (Photo: Balázs Csibrány). 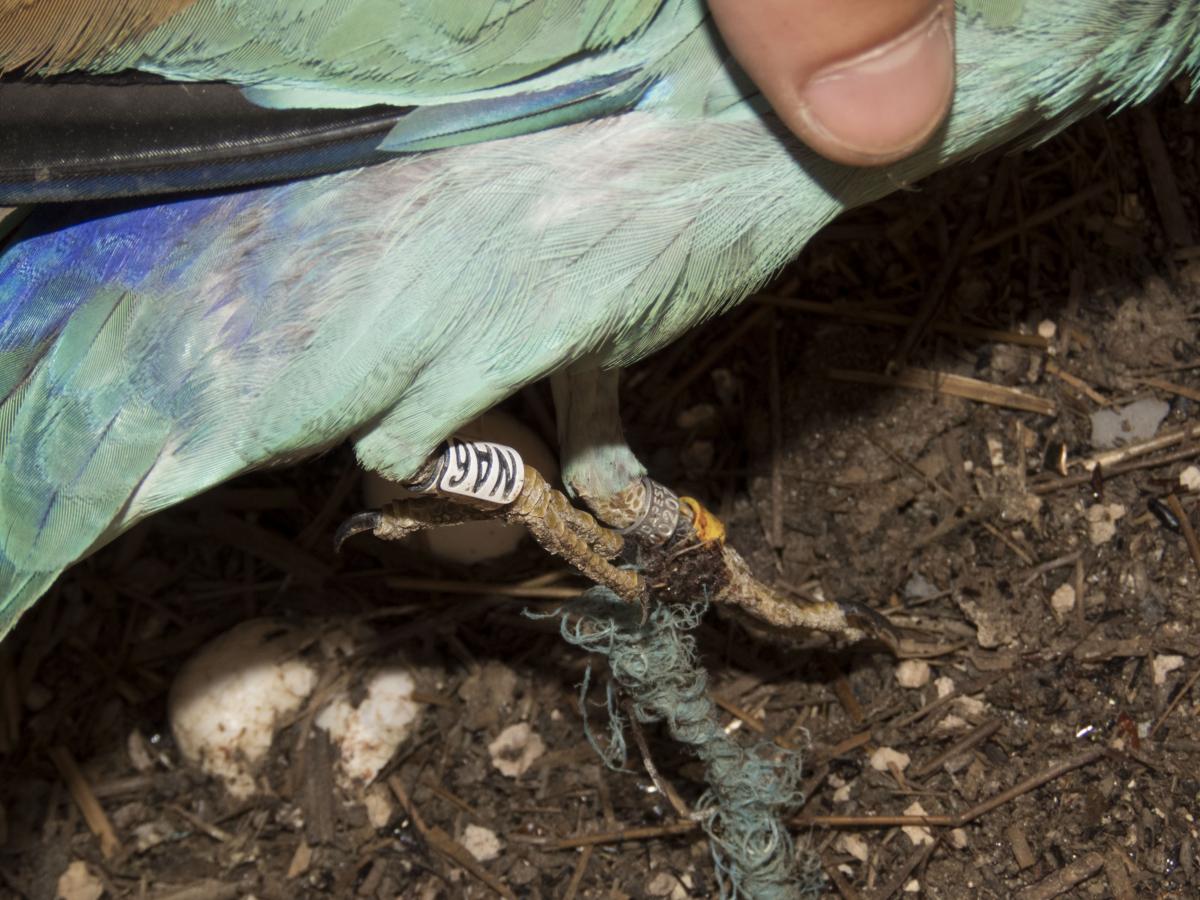 As the bird tried to get out of the snare, the string got even tighter around its toe (Photo: Balázs Csibrány).

The bird was removed from the nestbox together with the baling twine. The life threatening string was removed within minutes, luckily there was no sign of weakness, circulation problems of other injury on the bird, indicating that it had only been captured for a few hours. 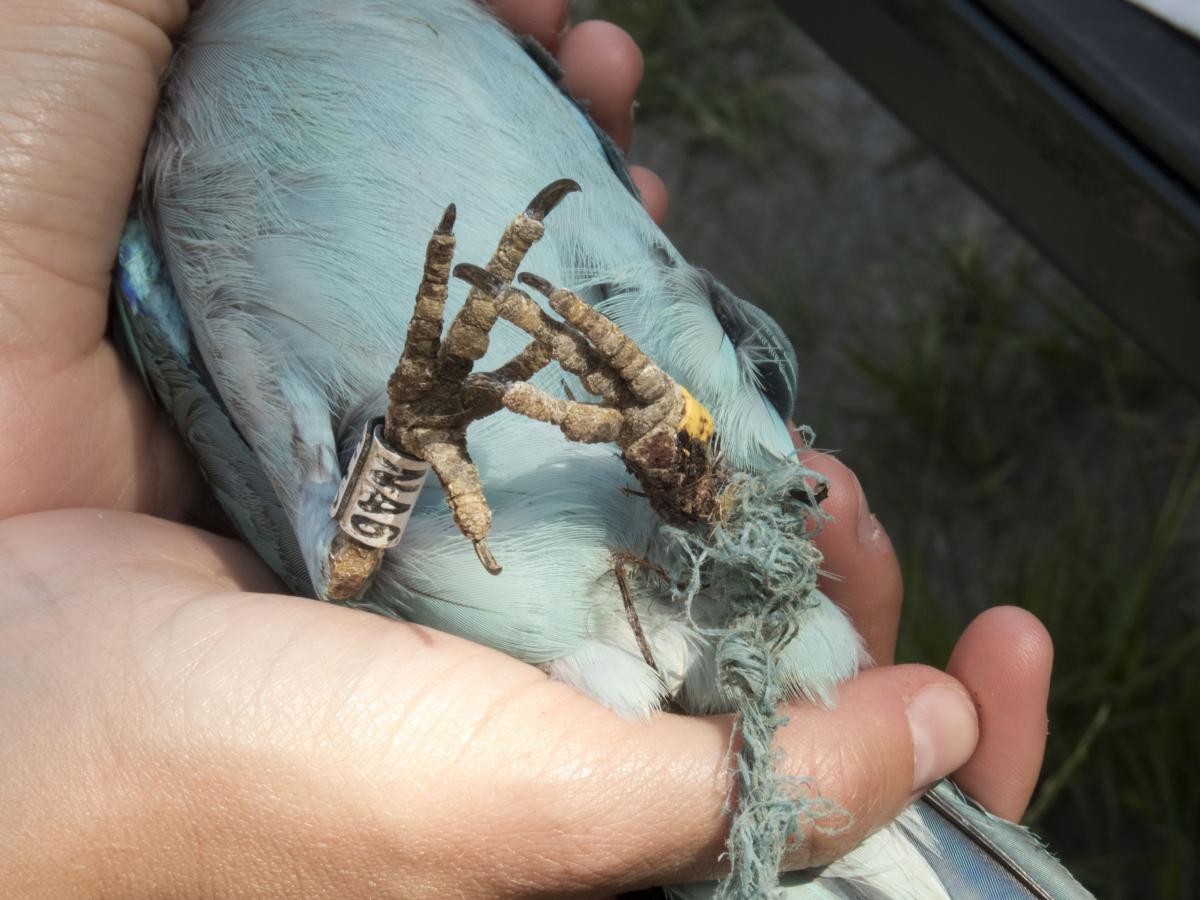 The bird was lifted out of the nestbox with the baling twine twisted around its toe (Photo: Balázs Csibrány). 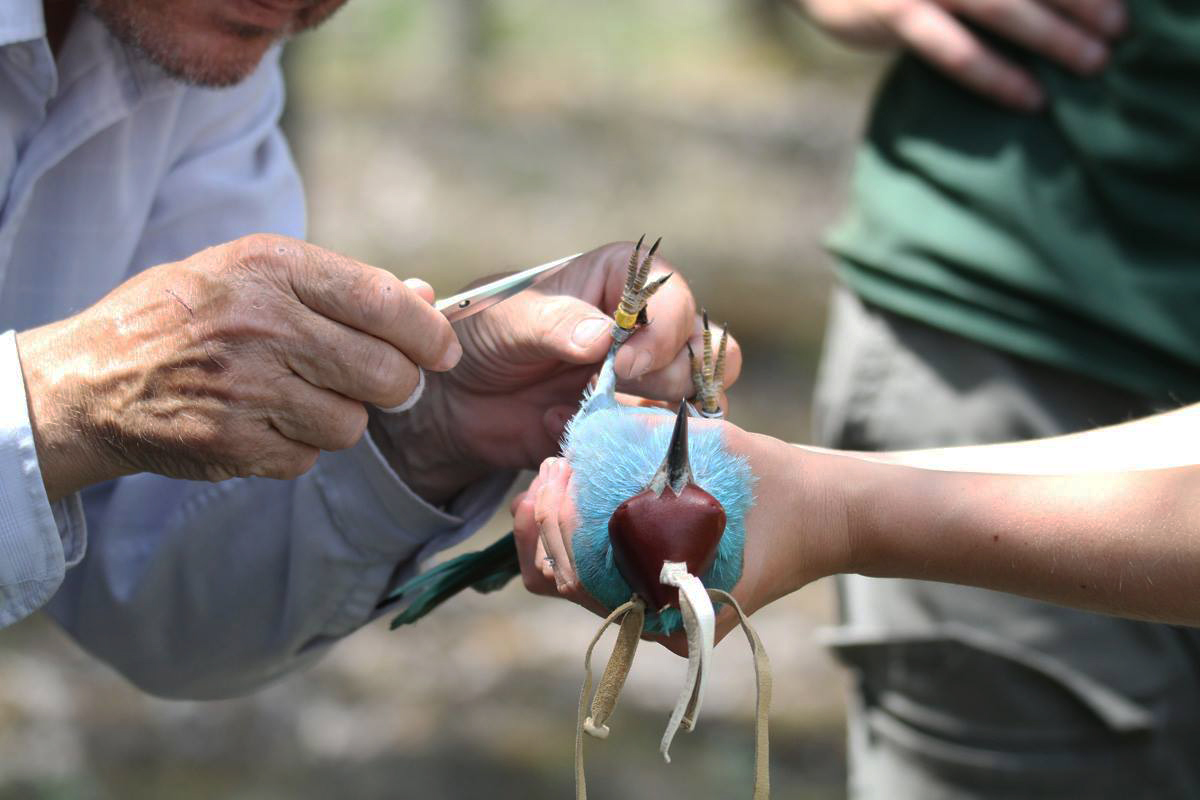 The bird was then released back into the nestbox. The remaining three eggs will hopefully hatch successfully. Without this intervention  both the eggs and the male bird would have perished. 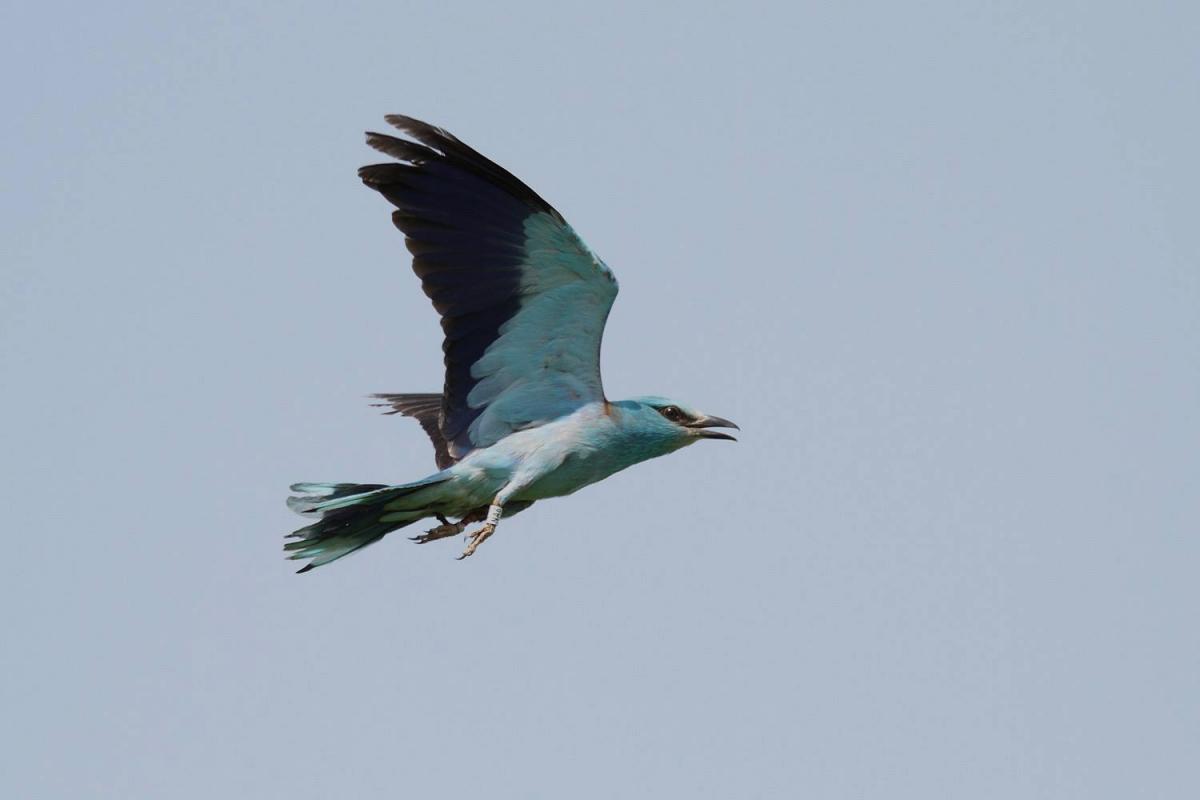 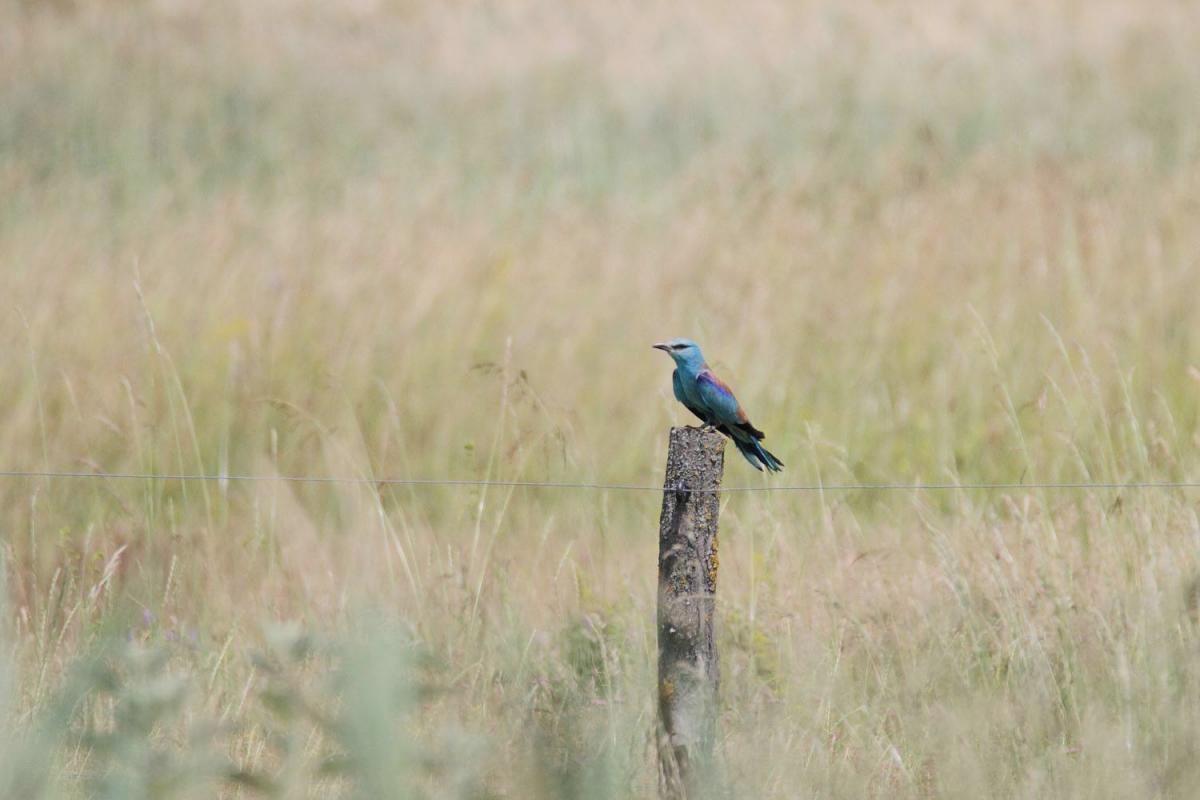 It is clear that the bird did not get permanently injured (Photo: Zoltán Oláh).

Experiments are underway in creating and using biodegradable baling twines, however the careful disposal of agricultural and household waste remains the cheapest and most efficient solution.